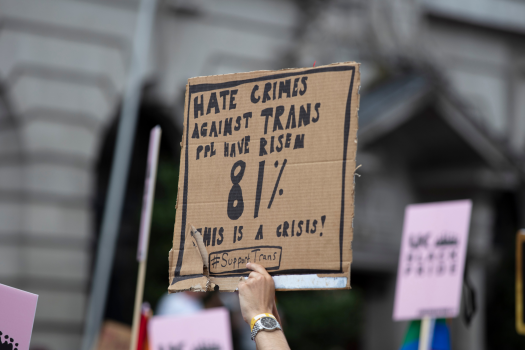 "Transphobia is currently rife – particularly online and on social media, but also in person and often towards those people early on in their transition journey who don’t have robust support networks yet. I think there is a stark lack of consequences for people who are transphobic and this is leading to an increase in people feeling they have a freedom to express prejudiced opinions and use purposefully hateful language to express that. In the media there are daily debates relating to trans people having basic human rights - like being able just exist and use the toilet and accusing all transgender women as being dangerous. I think people expected lockdown to reduce the incidents of hate crime but it didn’t - while trans people were isolated from their support networks and having numerous issues relating to access to trans healthcare they were also suffering from abuse from neighbours, families and strangers if they did venture out. Trans-specific support was being ‘zoom bombed’ and it was difficult to find the right sort of support for people – especially if there were additional needs or poor digital access.

"I think when everywhere in society generally feels unsupportive, unfriendly and unsafe and you have to mentally map where you can urinate, or what shop will let you try on clothes, or what areas/times to avoid certain routes in case of school children, or what public transport to avoid – it’s a huge proportion of your mental capacity to use for daily tasks. Trans people often feel that authorities like the police are more likely to be the perpetrators of transphobia towards them, so don’t want to risk the lottery of whether you end up reporting to a ‘good one’ or not. Reporting hate crimes becomes arduous and feel like an insurmountable task, while minor incivility and repeated discrimination are a regular occurrence for trans people – it’s tiring and unrewarding and often re-traumatising to relive it, and it often feels like you haven’t got the capacity left to deal with all the extra admin that is required of you to manage it. Which is why I’d encourage people to speak to hate crime advocates or report online anonymously if they decide not to pursue a criminal outcome, but just want authorities to know where there might be a problem.

"I’d also encourage people to be allies and to be active bystanders – report incidents you witness in public, step in and defuse situations if a trans person is being abused, boost the visibility of positive trans stories and normalise the use of pronouns in emails/on badges or the wearing a LGBTQ+ lanyard or badge, as it might be enough to make people feel they aren’t alone and there might be others who accept and support them."