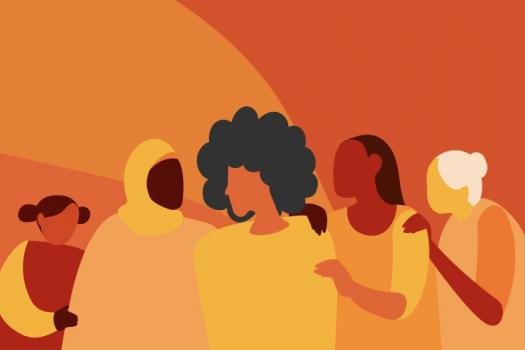 “One of the most scarring incidents happened to me on a busy underground platform when I was 16 and I was chased up the platform by an angry man shouting homophobic comments. No one on that platform helped me. No one stepped in. No one tried to get in his way. Everyone was happy for an angry, adult man to attack a child in public, that homophobia was acceptable and the status quo more important than my safety – that was what I took from that incident. Sadly that was not the only incident in public where no one stepped in to help me – and of course I didn’t report it – I was 16 and wasn’t out to any adults and thought my parents would find out I was gay if I did report it.

“True – the women on the receiving end of any kind of hostility or violence might have valid reasons for not reporting, or they might be too busy, overwhelmed or frightened to report an incident to an authority organisation – whether that’s their housing association, police, council, public transport operator, workplace etc but that doesn’t mean friends, colleagues, or strangers witnessing an event can’t assist her.

“Here are some practical tips that you might use if you witness a woman on the receiving end of hostility but don’t feel able to confront the attacker:

“1) Call the police for her: If you are witnessing a violent incident happening in front of you – call 999. She is probably a bit too busy to do it and you’d be amazed at how few people call police if an incident is happening in public, as everyone assumes someone else has called already. Don’t assume – just call for help. You (and her) don’t have to report anything when the police arrive – you don’t have to give your details, but police showing up might be enough of a deterrent to stop the violence/incident and if not – the police have the tools to step in when you might be unable to. Additionally, you can register to contact police by text - by texting the word Register to 999 from your mobile phone. It almost immediately registers you to be able to text the police for emergency help – particularly useful if you are witnessing an attack on a bus or train and may not want the attacker to hear you say ‘Police!’ and then talk about what you are witnessing – you can contact the police for the person being attacked in silence and the attacker won’t know.

“2) Distraction: Derren Brown has a great tool for distracting angry men in a red mist – confuse them. Derren Brown suggests talking specifically and in detail about how your garden fence at home is exactly 3ft high, for example. It’s out of place and weird and unexpected in a conflict situation and might be enough of a ‘what?’ moment to give the victim flee time or just to snap the attacker out of the red mist. Alternatively you can just approach the attacker and ask them for directions to Harrods. Or ask them for the time. Something innocuous and unlikely to turn the rage onto you.

“3) Be a professional witness: be the one to record what is happening, make a note of detailed clothing and facial identifying features and exact phrases said so you can be the best professional witness to someone and afterwards approach the victim and say you witnessed the entire encounter and provide them with your contact details – whether they want them or not. Write them down and give them in case they need them later. If she doesn’t want to report it, report it as a witness regardless – police may put on a skeleton report and close it if they can’t contact the victim but it helps police intelligence to know where and when offences are occurring so they can try to implement prevention (more PCSOs on that bus route at that time of day, for example), and it also provides valuable third party witnesses in case the victim ever does report it at a later point.

“4) Just ask the victim if they are OK afterwards: Do they want you to call police? Can they get somewhere safe OK? Would they like you to accompany her walking to the nearest point of safety – she might just want someone to accompany her to a tube station office to report it, or to a main road etc. Maybe you could help her call a cab so she gets the rest of the journey home safely?

“5) Men need to speak out against other men: Studies show that men react strongly when shamed by other men over their behaviour – specifically by being told their behaviour wasn’t ‘cool’. Other men saying loudly ‘Ouch’ or ‘that’s not cool’ and men not laughing at ‘bants/jokes’ at a woman’s expense, or another’s sexist or mocking behaviour, was most likely to get the offender to reconsider their ways and change. Speaking out against things quickly and simply saying ‘That’s not funny’ or ‘I challenge that’ to inappropriate behaviour is a simple way you can ensure you aren’t a silent bystander – as silence often is inferred as agreement.

“6) Online flagging: if you see comments and statements online that are hateful, inappropriate, sexist or just mean – flag them. Report them. Even if it’s not against you and doesn’t affect you – sometimes we all need active allies to be the ones reporting the hate and anonymous pile-ons that exists online when a woman speaks out about something.”