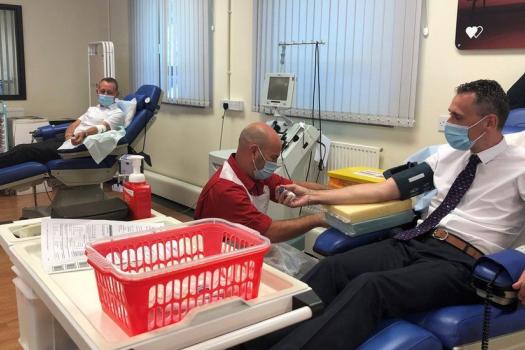 Until this week men who have had sex with another man within three months were not allowed to donate their blood.

This means that for the first time, as a man with a long-term male partner, you can still give blood without having to stop having sex for three months.

"We very much welcome this new fairer guidance, which assesses your eligibility to give blood based on your own individual experiences. For too long, gay, bi and other men who have sex with men have been unfairly and unjustly stigmatised by the blanket ban. It is very fitting that on World Blood Donor Day, that more people are able to safely donate their blood to help those that need it.

"As a patron of Freedom to Donate, I am delighted that gay, bi and other men who have sex with men are finally being treated the same as other blood donors.

"However, we are disappointed that in England there remains another eligibility question that inappropriately and disproportionately impacts Black people, particularly those of Black African background."

Despite recommendation from the Advisory Committee on the Safety of Blood, Tissues and Organs (SaBTO), there remains a three-month restriction on donating blood for anyone in England who has slept with someone from parts of the world where HIV and AIDS are ‘very common’. This criteria is vague and perpetuates misleading stereotypes around HIV. Although this has now been removed in Scotland and Wales, with other questions related to sexual health risk and travel related risk being deemed more than sufficient to identity and defer higher risk donors, the Department of Health and Social Care in England has decided not to remove it.