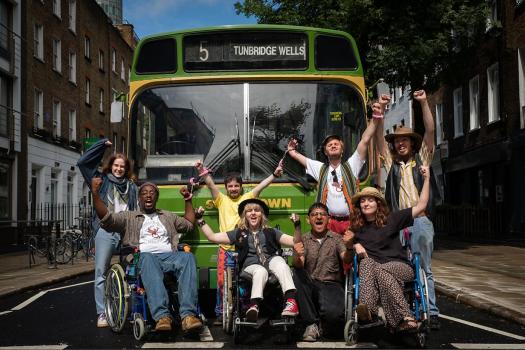 "As part of celebrating 25 years since the passing of the DDA (The Disability Discrimination Act 1995), now superseded by the Equalities Act, the BBC commissioned a docudrama about the people and events leading up to the historic legislation being passed.

"The film looks at events through the eyes of a couple Barbara Lisicki and Alan Holdsworth, who were instrumental in forming campaigning group DAN (The Disabled People’s Direct Action Network). I am proud to have been an organiser/activist in DAN and worked closely with Barbara and Alan to fight for accessible public transport and civil rights legislation.

"I was delighted to find out that my character ‘Sue’ is being played by disabled actor Philippa Cole, and I also have a cameo appearance as a supporting actor. Our METRO GAD Co-Chair Carlo Salvatore is also a supporting actor in the docudrama having been a DAN activist too. Our acting Co-Chair, John Ley, and METRO GAD Management Committee Member Kate Brown, also took part in the exciting protests of the 1990s where many of us got arrested in the non-violent civil disobedience actions. It is exciting to think that the tremendous efforts that went into campaigning for our civil rights in the 1990s is now being recognised as part of our social history.

"I am thrilled that it has been written by BAFTA award winning writer Jack Thorne, with lead roles played by the talented Ruth Madley as Barbara Lisicki and Arthur Hughes as Alan Holdsworth. I am thrilled that talented disabled and non-disabled professionals are key throughout the production. The film ‘Then Barbara Met Alan' will also be available on Netflix as well as on BBC 2. I am looking forward to seeing the completed film and hope you enjoy it!"

You can watch the BBC announcement of 'Then Barbara Met Alan' on their website.

Then Barbara Met Alan is due to air in Spring 2022.