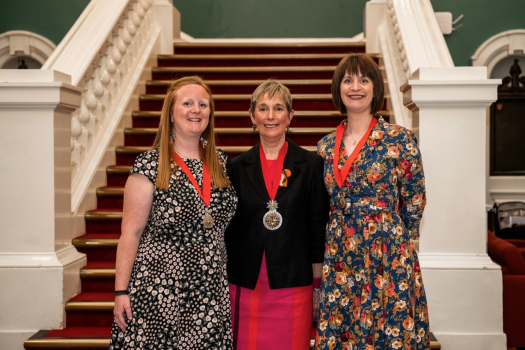 METRO has been chosen as one of the Mayor's charities for the year. Former Deputy Mayor, Councillor Linda Bird, took over as Mayor on 14 May.

Cllr Bird has taught young people since 1972, teaching dance in Eltham and becoming a headteacher in Thamesmead. She continued her teaching as a part time youth worker, teaching adult education evening classes, and running a successful dance company called Greenwich Youth Dance. She stood for council in 2014 and was pleased to be elected by the people of Eltham North Ward, where she has lived since 1980.

Cllr Bird has said “My priorities as a local Councillor and now as Mayor have always intended to be harnessing the power of diversity and difference, and championing equality and fairness. The coronavirus crisis lends these priorities a renewed focus, and a chance to support the rebuilding of the Borough in a way which serves the whole community. My Mayoral legacy will be to foster and continue to grow our borough’s community spirit, an initiative to build hope for the future.”

This year, Cllr Bird has chosen two charities to support during her time as Mayor. Metro Greenwich - a leading equality and diversity charity providing health, community and youth services across London and the South East, and Greenwich Starting Blocks - a local charity offering support for young athletes and giving opportunity for excellence.

Our CEO, Dr Greg Ussher, said: "We are so impressed by Cllr Bird’s vision as to how we can build fairer communities, and her commitment to diversity and equality. We are simply delighted to have been chosen as one of the Mayor’s charities."

Councillor Bird is pictured above with her Consorts for the forthcoming year, her daughters Amy and Emily.