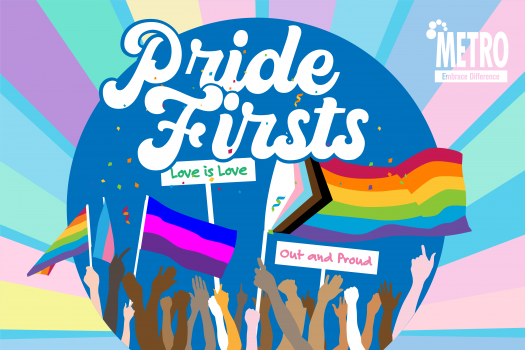 This year marks the 50th anniversary of the first official ‘Gay Pride’ march mounted by the Gay Liberation Front (GLF) and Radicalesbians in the USA as well as the UK’s GLF first public queer rights demonstration on Highbury Fields in London.

This was the start of the international Pride movement that today embraces the whole LGBTQ+ community.

This year’s postponement or cancellation of many physical events because of the COVID-19 pandemic is another first in the history of Pride.

To mark all of these ‘Pride Firsts’ across all of our communities, METRO Charity is creating an online exhibition to share and showcase people’s first experiences of Pride. We are inviting you to submit photos, film footage and stories of your first Pride experiences – whoever, and wherever you may be.

Emma Jones, METRO’s Head of Insight, reflects on a Pride First from last year’s celebrations, “In 2019, the UK’s first participants in Traveller Pride marched in London within the main procession. A mere 20 participants in the crowd of thousands, this modest yet flamboyant group marked the hugely significant moment when a particularly marginalised and disparate LGBTQ+ group was out, visible and united on the streets of central London, seen by crowds of over a million people.”

Also a first in 2019 was London Trans+ Pride although activists in Brighton blazed this trail some seven years ago. And on 11th April 2020, the UK was set to have its first dedicated Muslim Pride which was postponed because of the COVID-19 lockdown.

Significant as events in their own right, these Pride Firsts and the act of being ‘out and proud’ visibly within a community reveal the diversity of the Pride movement’s evolution over five decades in the UK and beyond. We want to bring these stories together and celebrate the joy and the impact that Pride marches and festivals have had on the people who have taken part.”

Submissions for this digital exhibition will be collated throughout the summer with an online launch event at the end of August. You can enter by sharing your Pride Firsts with us on social media using the #PrideFirsts hashtag and mentioning us @METROCharity or by emailing pridefirsts@metrocharity.org.uk.