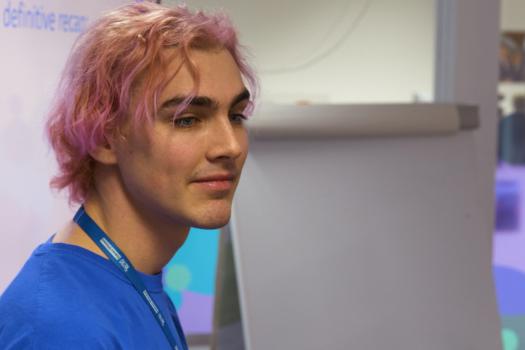 Non-binary means that a person’s identity is not categorised through the binary way that society often sees individuals’ gender, most commonly described as either man or woman. One might say about a stranger or colleague that ‘he has nice hair’, or ‘she is wearing a cool hat’; such comments are made under the assumption that the person being spoken about identifies and signals their gender through a combination of characteristics and expressions in-line with a perceived gender.

For non-binary people, this is not the case. People are increasingly identifying as non-binary; we may not have always been as visible, or talked about; however increased understanding and acceptance of gender-non-conformity has allowed those whose gender does not match binary assumptions to thrive and feel comfortable in being ‘out’.

You might feel stumped when someone expresses themselves in a way that does not meet the usual binary expectations of male/female, boy/girl or man/woman, so here are a few tips to make sure that your workplace is inclusive of non-binary and gender-non-conforming people:

Often, it might feel appropriate to use gender to refer to groups of people when talking in person, in meetings or over email, for example ‘Good morning ladies and gentlemen’, ‘Alright guys, let’s do this’ and ‘Men and women at our company…’

These statements assume that employees all identify within the binary. Alternatively, you could use the following terms to include all, regardless of gender:

This can also extend to formal policies and procedures where often ‘he/she…’ is used. In place, policy can refer to people as ‘they…’ or ‘individuals…’. For example, ‘he/she is entitled to dependency leave’ can be changed to say ‘they are entitled to dependancy leave’.

Fun fact! The singular ‘they’ has existed since the 14th Century, and is commonly used by people when referring to someone whose gender is not known, without even consciously realising.

Give options that aren’t just male/female on staff surveys and forms as well as including gender-neutral honorific title options, such as ‘Mx’ (pronounced “Mix” or “Mux”) alongside ‘Ms’, ‘Mr’ and ‘Mrs’. This allows non-binary people to feel included, sometimes even before entering the workplace for the first time.

Social inequalities often play out in the realm of toilets and other such facilities. Many disabled toilets remain inaccessible and some establishments have ‘female toilets’ that offer baby-changing facilities where the ‘male toilets’ do not. It’s important your employees feel comfortable in their workplace. Having to be in a toilet where one’s gender is going to be questioned can be traumatic when it needn’t be. It often results in side-glances, comments and even physical aggression. In order to allow people to feel comfortable in this situation, employers and companies need to look into setting out space for ‘all-gender’ or ‘gender-neutral’ toilets. Gendered Intelligence have examples of signage you could use.

There is a growing awareness of how individuals use pronouns (i.e. they, she, he), some non-binary people might prefer being referred to as ‘they/them’, or maybe even something less common like ‘hir/zey’ or ‘ey/em’.

Employers can enable people to feel comfortable sharing this by stating their own pronouns when they introduce themselves: ‘Hello my name is Peter, my pronouns are he/him’. This does not mean employers should force people to disclose their pronouns, however it allows non-binary people to feel comfortable being open about using pronouns that aren’t assumed of them. An easy and common way of getting this out of the way is to put one’s pronouns in email signatures.

It’s sometimes awkward and not always easy to correct people on this. Giving people the space to tell others by modelling this behaviour is a good way of normalising the conversation and minimising making people feel bad about making a mistake.

Studies have found that a sense of belonging and being accepted is highly correlated with workplace satisfaction, so it’s important to include and respect all people regardless of how they identify their gender. In my personal experience, the charity sector, through its focus on care and advocacy, made it easier to express my non-binary-ness. I’ve felt so happy at work, being able to use honorific titles such as Mx, gender neutral pronouns such as they/them, as well as expressing myself comfortably through my clothes, hairstyles, mannerisms, interests. Not all non-binary people feel, look or express themselves in the same way but hopefully these tips will allow you to think about doing more to include non-binary people in the workplace.

Best Practices for Non-Binary Inclusion in the Workplace, Out & Equal Workplace Advocates, 2018