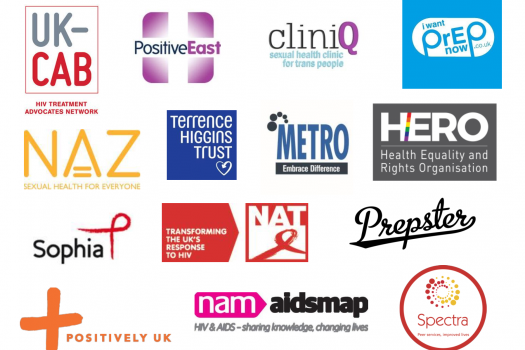 Today we join 13 other leading HIV community organisations to call for urgent action on PrEP in London.

"With NHS England's commitment to fund additional places on the PrEP Impact Trial, we urge London’s health leaders to ensure that the capital maintains it's leading position on HIV by resourcing and making available all additional places offered for the trial.

"The original cap on the number of places available to clinics has in some cases meant that people who want PrEP are being turned away. PrEP is one of the many tools we have in the fight against HIV. It is also important that everyone involved, in an effort coordinated by the Trial Oversight Board, ensures the news about PrEP and its availability reach all communities that might benefit - especially women, heterosexual men and trans people, who have not yet accessed this trial in large numbers."

Just over a year ago in January 2018, your organisations made the bold and welcome step of signing London up to the HIV Fast Track Cities Initiative.

This includes the commitment to ending new HIV transmissions in the capital. PrEP, as part of combination HIV prevention, is an essential tool if we are to achieve this ambition as we know it is almost 100% effective when taken as prescribed.

Yet, we are writing to share our alarm and disappointment at the news that London has decided not to accept its full share of additional places on the current national PrEP Impact Trial.

London councils have said they will accept “some” additional places but there is no clarity on how many these are and when these will be made available. As of today nearly half of Trial sites in London are currently full for gay and bisexual men, with men at high risk of HIV being turned away, and some going on to needlessly contract HIV.

As you are aware London has the highest prevalence of HIV amongst its residents and continues to see the largest number of new HIV diagnoses. In 2017, nine gay or bi men were diagnosed with HIV each week in the city. We are deeply concerned that by London deciding not to offer the maximum number of places now available on the PrEP Impact Trial, that the capital’s status as a leader in HIV prevention has come into question with its inaction on PrEP.

This comes at a time when most Trial sites outside of London have accepted the offer of double PrEP places and will be working to make these available as soon as possible. The inequity in access to PrEP between London and the rest of England is now stark.

We ask you, as London’s health leaders, to take urgent action and intervene to ensure that the full complement of additional places offered for the PrEP Impact Trial is accepted and made available immediately to those in London who need them.