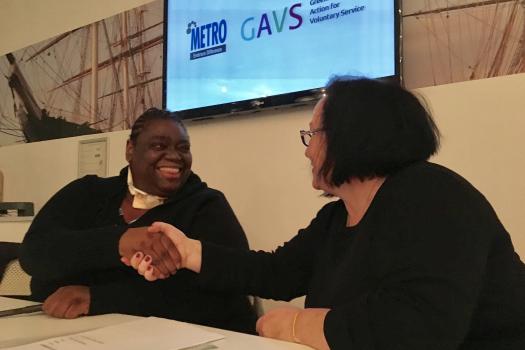 Greenwich Charities Unite for a Stronger Future Together.

GAVS’ services will continue as a distinct part of the METRO family of services, addressing the needs, and channelling the voice, of the voluntary, community and faith sector in the Royal Borough of Greenwich. This work will continue to be led by GAVS Members.

At the signing this evening Deputy Leader for the Royal Borough of Greenwich, Danny Thorpe referred to the thriving nature of the borough with so many amazing charities, groups and community organisations - over 370 of which are members of GAVS.

"Two shining beacons of this voluntary and community sector are GAVS and METRO Charity. The borough is delighted to see two such impactful organisation come together for an even stronger future together."

Dawn reflected on a marriage between the organisations, "As GAVS developed it became clear that the environment for infrastructure organisations was becoming increasingly difficult – with a never ending stream of reports telling us this but few providing any answers.  So we decided to merge and we found a fantastic partner to merge with – METRO.

"Merger with METRO provides us with fantastic opportunities to grow and expand our services within  and outside the Royal Borough."

Finally, before putting pen to paper, Gwen highlighted her own experience of merging with METRO, "As the former Chair of Positive Parenting and Children, I have first hand experience of a merge with METRO, a merge that was key in ensuring our vital work with families and children affected by HIV continued, a merge that was sensitively and carefully delivered aligning and enhancing PPC's and METRO's HIV offer.

"I'm delighted to be here today as METRO's Vice Chair."

The merge formally comes into effect from 1st November 2017.